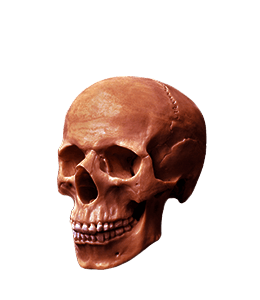 What is Caput Mortuum Color?

The name of the color comes from Latin meaning "dead head". The color is very dark reddish brown which comes from haematite iron oxide pigment used in paints and dyes. It was also commonly used to paint the robes of religious figures which probably lead to its other name, cardinal purple.

The color is not included in the web list and cannot be used by name in HTML and CSS code. However, caput mortuum can be applied to web pages with its hex code, RGB and/or HSL values. Please note that the CMYK color values listed on this page have been derived from the hex code using known formulae and are only approximates.

Caput Mortuum (also spelt as caput mortum or caput mortem) is sometimes confused with Egyptian brown, a pigment that was produced by grinding mummies. However, the two colors could have been the same once upon a time though their sources were different - one from mummies and the other from earth.
Other names: Cardinal Purple

The complement of Caput Mortuum is Dark Slate Gray with the hex code #205259. Complementary colors are those found at the opposite ends of the color wheel. Thus, as per the RGB system, the best contrast to #592720 color is offered by #205259. The complementary color palette is easiest to use and work with. Studies have shown that contrasting color palette is the best way to grab a viewer's attention.

Caput Mortuum triadic color palette has three colors each of which is separated by 120° in the RGB wheel. Thus, #205927 (Cal Poly Pomona Green) and #272059 (Space Cadet) along with #592720 create a stunning and beautiful triadic palette with the maximum variation in hue and, therefore, offering the best possible contrast when taken together.

The tetradic palette of Caput Mortuum has four colors - #205927 (Cal Poly Pomona Green), #205259 (Dark Slate Gray) and #592052 (Japanese Violet) in addition to the base color (#592720). A tetradic color palette is complex and, in most cases, should not be used off-the-shelf. We suggest tweaking the colors slightly to achieve desired results.

Caput Mortuum square color palette has #365920 (Mughal Green), #205259 (Dark Slate Gray) and #442059 (American Purple). Quite like triadic, the hues in a square palette are at the maximum distance from each other, which is 90°.
Note: For several colors purposes, a square palette may look much better than the tetrad color palette.

Our Caput Mortuum rainbow color palette is based on the RGB model and consists of 7 colors, just like the traditional rainbow. You might not see a lot of variation in color, especially if the chosen color is dark or extremely light. However, this can lead interesting rainbow palettes that are faded, soft, pastel or dull.