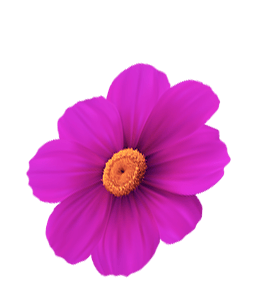 What is Magenta Color?

On the RGB wheel, Magenta is located halfway between blue and red and appears as a bright and vivid color on the screen. It is also one of the four colors used by CMYK printers. The color comes from an aniline dye and was produced by French chemist François-Emmanuel Verguin in 1859. The scientist patented it and called it fuchsine. The name changed to magenta after the Italian-French victory over Austrians near the town of Magenta in Lombardy, Italy.

It is a common color of flowers and was also popular in psychedelic art.

Included in the X11 and web lists, the color can be used by its name in HTML and CSS code. Magenta is identical to another web color, Fuchsia, and both have the same hex, RGB and HSB values.
Other names: Fuchsia

The complement of Magenta is Electric Green with the hex code #00FF00. Complementary colors are those found at the opposite ends of the color wheel. Thus, as per the RGB system, the best contrast to #FF00FF color is offered by #00FF00. The complementary color palette is easiest to use and work with. Studies have shown that contrasting color palette is the best way to grab a viewer's attention.

The analogous colors of Magenta (#FF00FF) are Bright Pink (#FF0080) and Violet (Color Wheel) (#8000FF). In the RGB color wheel, these two analogous colors occur to the right and left of Magenta with a 30° separation on either side. An analogous color palette is extremely soothing to the eyes and works wonders if your main color is soft or pastel.

Magenta triadic color palette has three colors each of which is separated by 120° in the RGB wheel. Thus, #FFFF00 (Yellow) and #00FFFF (Aqua) along with #FF00FF create a stunning and beautiful triadic palette with the maximum variation in hue and, therefore, offering the best possible contrast when taken together.

The tetradic palette of Magenta has four colors - #FFFF00 (Yellow), #00FF00 (Electric Green) and #0000FF (Blue) in addition to the base color (#FF00FF). A tetradic color palette is complex and, in most cases, should not be used off-the-shelf. We suggest tweaking the colors slightly to achieve desired results.

Magenta square color palette has #FF8000 (Orange (Color Wheel)), #00FF00 (Electric Green) and #0080FF (Azure). Quite like triadic, the hues in a square palette are at the maximum distance from each other, which is 90°.
Note: For several colors purposes, a square palette may look much better than the tetrad color palette.

Our Magenta rainbow color palette is based on the RGB model and consists of 7 colors, just like the traditional rainbow. You might not see a lot of variation in color, especially if the chosen color is dark or extremely light. However, this can lead interesting rainbow palettes that are faded, soft, pastel or dull.